Within the Condylognatha the Thysanoptera are classified as a sister group of the Hemiptera (true bugs). All these insects have the maxilla and the mandibles developed as stylets. Therefore the Condyloghnata are considered as a monophyletic group.
The Thysanoptera’s genesis – with the asymmetric and asynchronous action of their mouthparts – is presumably based on an adaptation to specialized food: pollen. Pollen grains are so small (20 – 40µm), that the use of more than one single stylet would squash, rather than puncture, the tough wall. That explains why, to the ancestors of modern Thysanoptera trying to feed on pollen grains, two mandibles were an evolutionary disadvantage, and the atrophy of one has enabled thrips to exploit this rich source of food. The transference to feeding on plant juices is probably a later development, and fungus-feeding an even more modern adaptation. (Lewis, T. 1973: Thrips: their biology, ecology and economic importance. Academic Press, London & New York). 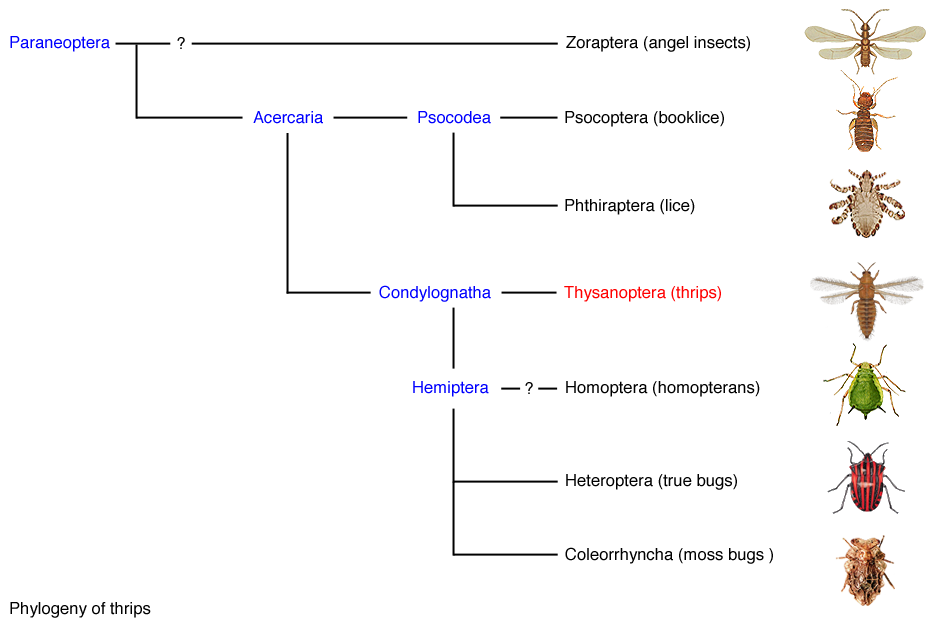 The internal relations of thrips have been little studied. Currently, most entomologists classify the Thysanoptera into nine extant families, grouped within two suborders, the Terebrantia and the Tubulifera. The specific phylogenetic relations between these families, however, remain uncertain. The phenetic features of the relevant taxa are equivocal, particularly, concerning the relation of the Phlaeothripidae towards the other families.

Within their suborders the Thysanoptera are associated with the following families (†: families including fossil taxa only):

Studies using molecular biology techniques indicate the subfamily Panchaetothripinae, which is currently associated with the Thripidae, as an autonomous family, that presumably was separated very early. Future modern techniques, definitely, will influence and restructure our view on the internal relations between the Thysanoptera.

Use this form to find things you need