When air appears viscous and sticky…

Small sized insects often have strange shaped wings with conspicuous fringes or setae at the edges. With regard to the principles of fluid physics, these features can be associated with the Reynolds numbers, a quantity indicating the ratio of inertial forces to viscous forces within a fluid, and can be interpreted as adaptations to their flight characteristics. To produce the necessary lift, usual wings require a certain speed. Due to their low inertial load, the smallest insects, however, are decelerated by the viscosity of the air and thus, they remain simply too slow to profit from aerodynamic forces in this manner. On the other hand they can use the viscosity directly for their lift, resulting in a form of flight comparable to a swimming movement in viscid syrup. Wings with fringes or similar structures are particularly appropriate for this locomotion. Therefore they have convergently evolved in many small sized insects of different orders, e.g. beetles (Coleoptera: Ptiliidae, Staphylinidae), moths (Lepidoptera: Pterophoridae) or hymenopterans (Hymenoptera: Mymaridae). 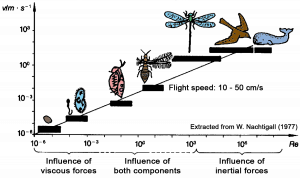 To increase their lift, small insects with low Reynolds numbers use a particular mechanism, the clap and fling motion. This mechanism allows large circulations around the wings to be established immediately as they start to move. In the clap part of the cycle, the wings initially approach with their leading edges over the insect’s back, creating a circulation of air that sets up vortices and generates useful forces on the wings. When the fronts of the wings touch, the wings rotate around their leading edges, to be closed in the “clap”. As a result, expelling air from between them creates useful thrust. Than, the wings rotate around their trailing edges to begin the “fling”. The leading edges move apart causing the air stream in between them inducing new vortices, generating more force on the wings and finally increasing the climb. The trailing edge vortices however cancel each other out with opposing flows. This presumably might help the circulation of the air to grow more rapidly.

Reaching a speed of 10cm/s to 50cm/s, thrips are almost always slower than air movements, and therefore, they seldom perform straight flight directions. They are rather carried away and dispersed with winds.

Use this form to find things you need